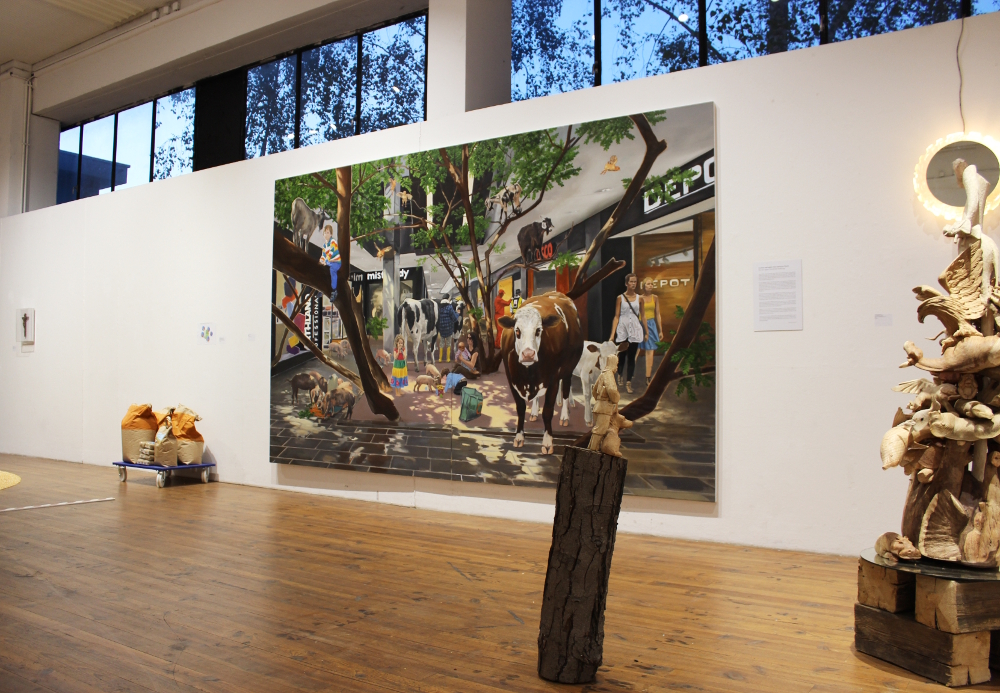 International multimedia- and performance project about the future of food

Kunstverein Kunsthalle Hannover e.V. presents the exhibition FoodFuturesArt, which deals with the problems of the future of food. One of my large format paintings, showing so called »farmed animals« not as food, but as companions encountering humans on equal footing, will be shown there as well.

Statement about insects as food

My paintings show scenarious of a world, in which livestock breeding belongs to the past and humans and other animals encounter on equal footing. This utopia of a world without animal exploitation is not limited to land animals, like pigs, cows and chickens, but includes all other animals, like fish and insects as well.

I refuse the, in the context of this exhibition pointed out, nutrition with insects, as a pretended ecologocal and progressive form of nutrition and the breeding, keeping and killing of insects, which comes along with that, just as any other form of animal exploitation. I distance myself explicit from the so called „insect food“-companies and their products, which are named and offered in the context of this exhibtion.

Today there is simply no need to eat animals. There is enough plant based food available, incuding alternatives to meat, milk and so on, which need less land, water and energy for their production, than the detour via livestock breeding. We can abstain from the cruelty to kill other animals for our nutrution without big issues.

Even if insects are not so familiar to us, like for instance pigs, they are creatures that have teir own goals and partly high complex froms of comunication and cohabitation. We must not exploit them for our purposes.

Let us not add to the 800 million land animals and numberless fishs and shellfishs, that are killed every year in Germany alone for the food industire, not further millions of killed insects. Let us end the crual practise of eating animals.

Let us break up with the profits at expence of the animals. For a progressive organic-vegan and solidary way of food production and a society beyond markets and states, which also considers the needs and interests of other animals.