Since 2008 I am working on renegotiating the human-animal relationship with the means of painting. On the one hand, the social status of animals has played a role in the visual arts since early cave paintings, on the other hand, art can question norms, power relations and traditional conditions and reveal new perspectives.

At the beginning of my artistic work on the social human-animal relationship, I painted meat landscapes and pieces of meat that were fed back to their original bodies, as an attempt to undermine the repression of the origin of yoghurts, wieners and schnitzels – to counter the absence of slaughter and the bad life of the animals with the presence of the painting mass, the meat colours, the materiality of the animals’ bodies.

Over time, however, I also tried to show other perspectives in my paintings: enraptured, utopian images of a different, possible human-animal relationship. Images in which pigs, cows and chickens are removed from the fattening facilities and slaughterhouses, appropriating parks, shopping malls and streets. The animal industry lies in ruins, and humans and other animals meet at eye level. A perception of other animals that is not marked by a desire to dominate and objectify, but shows them as actors, as subjects of their own lives, as related to humans.

I am vegan and of course also take care, that my working materials, such as paints and brushes, do not contain animal ingredients.

Transgressing Borders and Tearing Them Down. Encounters between Humans and (Other) Animals

The longer I’ve been committed to animal rights, alongside observing war and refugee developments, the more often I think that time and time again, borders are the problem. And the more closely I study Hartmut Kiewert’s images, the more clearly I see that he recognised borders as the problem a long time ago, and deals with this in his various cycles on humans and (other) animals. While he expresses it in art, I’ll just try to sum it up in words: not just geographical borders, but also conceptual ones. Thanks to these, we, the ones in power, divide all sentient, individual, life-loving individuals into “us” and “them”. We grant one of these the ability to live their lives in security and in the most comfort possible; we force the other into an existence in which they will never know freedom and protection from violence or basic joys like free movement or being with their family.

In the scenes portrayed by Hartmut, these borders are not completely dissolved, but very much constantly transgressed. His paintings toy with a “What if?” – not a naïve one, but one in which fences, barriers, and wounds remain visible. The pigs in the living room carry the scratch marks from the tight conditions, the piglets the sprayed-on numbers on their backs. In the background are ruins of slaughterhouses, which the cows are now viewing from the outside. With a concreted underground, forest floor, and picnic blankets collated in one room, you can almost hear the walls crumble and crunch. The barrier in front of the poultry slaughterhouse is finally given a meaningful purpose – hens can sit there comfortably with their companions.

The border between “animal” and “meat” is taken away from plates, where it tends to function as a moral smokescreen. The animal transporter, once an instrument of power, is now rendered invalid, blocked by birch trees in the background, while the once-imprisoned family mixes with free pigs. There would have been a similar image in Australia in 1959 – only without the wild pigs and birches – after a truck carrying pigs crashed. The animals, or at least some of them, were able to get away, creating a constant population in Namadgi National Park.

Even today’s highly overbred domestic pigs still possess the behavioural repertoire of their free-roaming cousins. So, what would happen the borders fell down? Sows would lay down in comfort to feed their young. They would create nests for them in small, leafy ditches, and wouldn’t have to push their noses into sad imitations over a blank, slatted floor. A sow spends the first days after birth alone with her young before gradually introducing them to the family. Free-roaming pigs also follow the kindergarten principle: if a sow needs to go and look for food, another will look after the little ones.

On the other hand, we cannot idealise or ignore the behaviour of human children towards other animals. There is increasing evidence that it dawns on many children around the age of four or five that meat is in fact dead animal. They are often brought up being forced to eat it, and are casually lied to. In this respect, Hartmut Kiewert also distances himself from any naivety or kitsch; instead he poses the question of how a child’s relationship with animals could look, in many forms.

I am especially touched by a picture on page 104, the pigs are alright. It probably hasn’t always been that way. Through no fault of its own, the pig ended up in a bad situation, but the little girl noticed and fortunately had the right tools to hand. The other children greet their new companion with joy.

But the girl’s hand lies almost nonchalantly on the pig’s back; it demands neither gratitude nor cuddles. Maybe it’s still a bit tired; if she had known beforehand what was in store for her today, she probably would have put different shoes on, but oh well… it’s done now! This girl stumbled upon an unjust border and tore it down. Let’s do that, too. 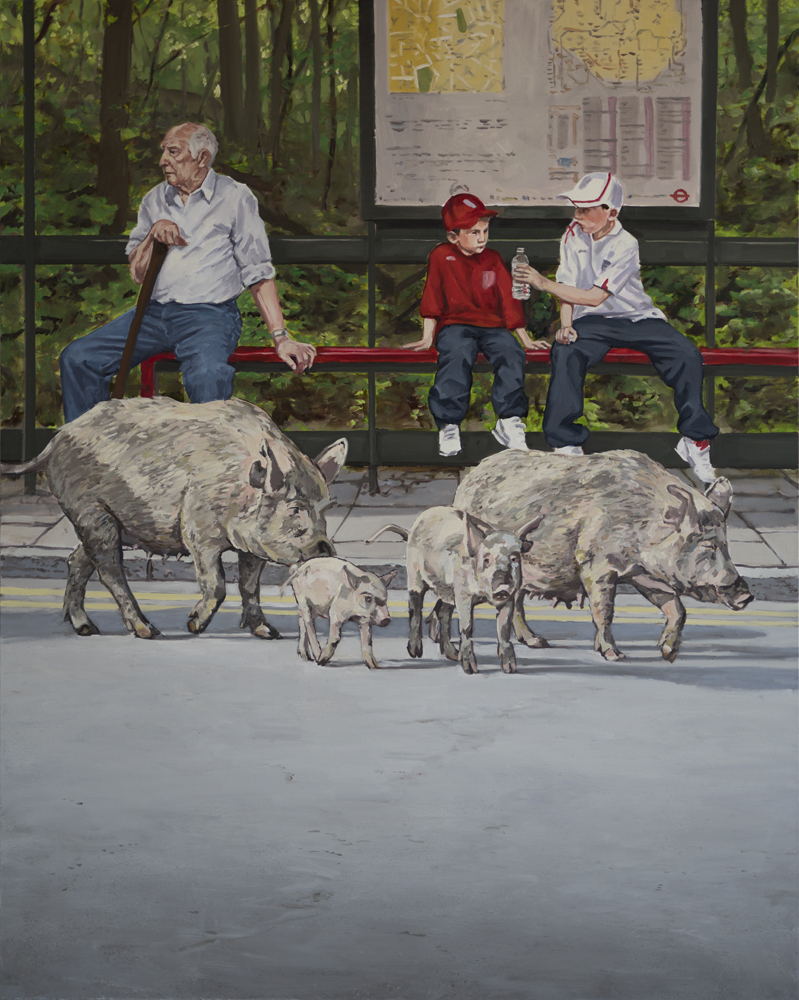 In traditional oil-painting-techniques you often find materials made from (dead/exploited) animals. For instance pig bristle brushes, bone glue (for priming the canvas), the use of egg-oil-emulsions for accompaniment or some pigments made from animals. In the following I will give you an overview of the materials I use and some issues to be solved when refraining from all non-vegan materials.

The binder of oil paints and media are pure vegetable (different oils and resins). An exeption are the paints of LUKAS because they unfortunately contain bees wax. The vast majority of non-vegan pigments are nowadays replaced by synthetic pigments. Exceptions are crimson (pigment name/pigment number: NR 3 or NR 4) , which is sometimes still “produced” by drying and cooking female carmin scale (nowadays crimson is usually synthetically produced –  depending on the producer and trademark) or ivory black/bone black (PBk 9), which is made of animal bones. Ivory black/bone black can also be mixed in other paints like ultramarin or umbra. Hence you should always pay attention to the pigment name and pigment number, which is written on the tube label (ivory black/bone black: PBk 9). With other paints – like acrylic, watercolor or pastell it is the same of course. Cheaper paints unfortunately often do not have written the pigment name and number on it. A very detailed list of pigments you can find here.

As far as I know there is no animal testing for art paints. But I am really sure only for the brands that I use: boesner, Daler Rowney, and Winsor & Newton. According to the information they give, they don’t do any animal testing.

Egg tempera, which is used in some traditional way of painting is obviously not vegan. I therefore do not use egg tempera for accompaniment.

The tissues for image carriers are vegetable (linen, cotton, jute, hemp etc.). Most commercially available readyto-use-canvases (usually made of cotton and not linen) are provided with an acrylic primer without animal glues. (But it is best to ask before buying or to contact the manufacturer to be sure the primer is vegan)

But since I’m building my canvases for larger sizes myself, I have problem to get tension on the canvas. Traditionally, the raw fabric is stretched over the wooden frame and then primed with bone-, rabbit-, or hide glue. This is important for the preservation of the fabric (the same can also be done with an acrylic binder) and – more importantly – for the tension of the fabric. The non-vegan glues, unlike acrylic binder, have the property to contract during drying, thus ensuring a very high tension of the canvas. I still have not found a comparable synthetic or vegetable glue (I would be very grateful for hints). Therefore I use already primed canvas (without animal glue; e. g. Henry from boesner) to span directly to the wood frame. Here I have also achieved good results in large formats, with regard to the tension of the canvas.

Alternatively you can use wood as a medium as well. However, wooden boards have the disadvantage that they are very heavy and therefore unsuitable for larger sizes. Also wood is prone to warping. I use wood only in smaller sizes.

In addition, I occasionally use polyethylene-tarp, which is purely synthetic. However, this material has the disadvantage that it can not be 100% flat span. Furthermore, the durability of oil paint on this material, to my knowledge, has not been tested yet.